Barbara Karl, curator of the MAK Textiles and Carpets Collection, writes about a unique object: Prince Eugene’s chintz bed, which has been part of the MAK collection since 1942. 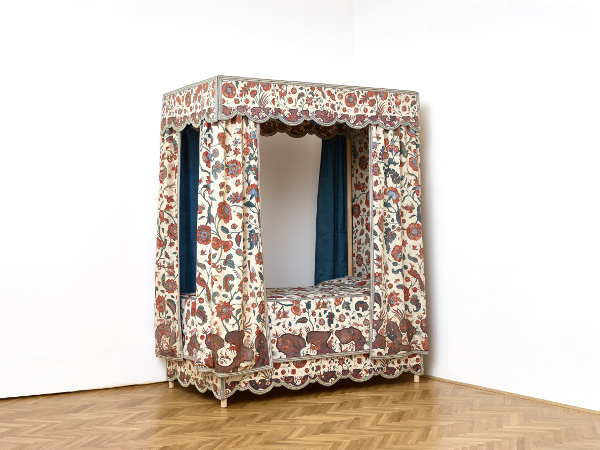 These Indian chintz furnishings for a four-poster bed were originally part of a complete room setting in Schloss Hof, a hunting castle in the Marchfeld near Vienna that in 1725 was bought by Prince Eugene of Savoy (1663–1736), the Paris-born Habsburg military commander. In 1755 the castle was acquired by Maria Theresia for the imperial family.

Today this single bed and six covers for chairs survive of what originally was an en-suite room furnishing; the wall-hangings have not survived. The material, cotton, suggests it was the summer furnishing of the room. The bed-hangings consist of a tester, a counterpane, eight valences, and three curtains. The lower parts of the dyed and painted Indian cotton panels used for the bed feature a strongly stylized rocky landscape populated by human figures and wild animals. Disproportionately large shoots grow out of the rocks and wind upwards, issuing fantastic, mainly red flowers and coiled leaves in different shapes. Small birds fill the spaces between the individual flourishing branches. The design is strikingly similar to the so-called Ashburnham hanging in the V&A (IS. 156-1953) and is presumably contemporary with it and others in this design. The colors are somewhat faded from use, under the seams as well as on the surface, which suggests a different use of the textile before being adapted for this bed. It is lined with blue silk and blue linen.

While building and furnishing his palaces, Prince Eugene acquired large numbers of textiles in England, the Netherlands, and France. These also included the present bed as well as a surviving room-setting of appliquéd Indian chintz in chinoiserie designs and a set of Indian embroidered bed furnishings. After the Prince’s death in 1736, an inventory of Schloss Hof was drawn up. One room was mentioned explicitly as being decorated en suite with Indian printed cotton (room number 31). It included, among other things, a double bed and six ordinary chairs—which matches the number of surviving covers at the MAK. Evidence from technical analysis suggests that the two single beds now at the MAK were originally a double bed. The inventory also matches with the surviving beds in the description of the blue-and-white braids and the blue lining. Thus, it is quite probable that the beds are the same as the one mentioned in the inventory. Most likely, the double bed was adapted for two single beds during the 19th century, long after the death of the Prince Eugene.

This text by MAK curator Barbara Karl was written for the exhibition The Fabric of India, which will be on view from 3 Oct 2015 to 10 Jan 2016 at the Victoria and Albert Museum in London. Prince Eugene’s chintz bed will be on loan from the MAK for the exhibition, where visitors will have a rare opportunity to see it. The conservation project was carried out by Edith Oberhumer and Philippine Lagardère.