Two years ago, the MAK received a valuable donation from the Prague-based art collector André Marcus, some items from which are currently on display in the large-scale exhibition JOSEF HOFFMANN: Progress Through Beauty . These include a writing set, designed by Hoffmann and executed by the Wiener Werkstätte, that was for a time in the possession of American Pop Art icon Andy Warhol. Sebastian Hackenschmidt, Curator of the MAK Furniture and Woodwork Collection, and Anne-Katrin Rossberg, Curator of the MAK Metal Collection and Wiener Werkstätte Archive, present the objects in this MAK Blog.

In two extensive donations in 2019 and 2020, André Marcus gifted to the MAK a series of important objects associated with “Vienna 1900”—to include furniture and other objects crafted by Otto Wagner, Josef Hoffmann, and the Wiener Werkstätte. In 2021, these objects were first presented to the public in the exhibition FOCUS ON COLLECTING 7: Objects from the André Marcus Collection .

The exhibition highlights included a 1905 desk, designed by Otto Wagner for the Austrian Postal Savings Bank, and an 1898 side table from the architect’s own apartment in Vienna’s Köstlergasse. Other unusual objects included a table manufactured in 1906 by the F. O. Schmidt company and a set of nesting tables by the J. & J. Kohn company, dated 1905 and attributed to Josef Hoffmann. The art-and-crafts objects by Josef Hoffmann were of course a very special feature. Besides the writing utensils, these featured a basket with handle, a flower vase, and a piece of tableware—probably a knife rest or a napkin ring—as well as a table bell. Also included were two Art Nouveau vases, designed shortly after the turn of the century and attributed to artist Jutta Sika.

Such an outstanding donation is by no means an everyday occurrence, even for a museum such as the MAK. It constitutes an extraordinary event that has been expressly honored by a presentation in the FOCUS ON COLLECTING exhibition series. The donor André Marcus may unreservedly be termed a cosmopolitan:

Born in Milan in 1950 into a Jewish family from Romania, he grew up in Paris and received his university education in Geneva. In 1974, he relocated to New York where he founded several companies. In the mid-1980s, he there also began collecting art with a thematic focus on turn-of-the-century Vienna. He purchased the objects at great auction houses and renowned galleries—above all at the branch of the Viennese gallery Metropol on Madison Avenue. In 1992, he was drawn back to Europe where he lived in Monaco for 15 years. Since 2007, he has been living in Prague. His donation to the MAK is motivated by the consideration that art works of Viennese provenance should be returned to their place of origin since here they may be best appreciated in their historical context. 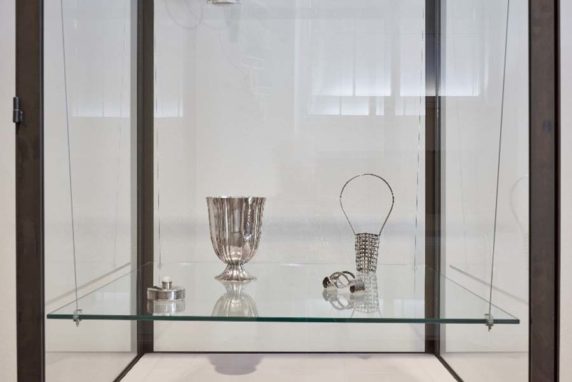 Silverware by Josef Hoffmann and vases by Jutta Sika in the exhibition FOCUS ON COLLECTING 7: Objects from the André Marcus Collection, MAK FORUM, 2021 © MAK/Georg Mayer 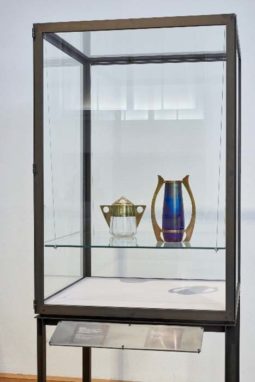 Silverware by Josef Hoffmann and vases by Jutta Sika in the exhibition FOCUS ON COLLECTING 7: Objects from the André Marcus Collection, MAK FORUM, 2021 © MAK/Georg Mayer

André Marcus himself described the motivation behind his bequest as follows: “In 1984, when I was living in New York, I had already collected some artworks but I wasn’t aware of the artists of the Vienna Secession. It was a friend of mine from Paris who first told me about Otto Wagner, Adolf Loos, Josef Hoffmann, and the Wiener Werkstätte. He took me to Galerie Metropol on Madison Avenue, just a few blocks from where I lived. It was on the first floor, up some steep stairs. The gallery wasn’t big but it had interesting works of art unlike anything I had seen before. As I remember, I started being really fascinated after the second visit but initially I only bought some art books on the Vienna Secession. Among my first art purchases at the gallery were furniture pieces by Josef Hoffmann, Adolf Loos, and Otto Wagner, among them the small side table from Wagner’s own apartment as well as a desk for the Postal Savings Bank. Later on, I also bought two beautiful vases by Jutta Sika. I often went to the gallery and avidly read the books I bought there. In 1987, I took these books with me when I first visited Vienna. It was winter and I hired a driver to see all the important sites: the Secession, the villas, and the Postal Savings Bank, in which the clients still used the same desks of which I had acquired one. I also went to the museums, of course, and discovered Gustav Klimt, Egon Schiele, and other artists from turn-of-the-century Vienna. The MAK became my favorite museum in Vienna—not least, I have to admit, because it also had a fascinating Asian collection. So, when I developed the notion of bringing the artifacts I had acquired ‘home’ to Vienna, donating them to the MAK seemed the logical thing to do.”

An especially beautiful piece of silverware in the donation is the writing set of hammered silver-plated alpacca, referred to above, whose components were manufactured up to twenty times between 1909 and 1917. The set included other utensils: a desk clock, a pen holder and a candlestick, an ashtray with matchbox holder, ink blotter and paper knife, a so-called gum pot with adhesive for sealing envelopes, and a table buzzer—an electronic bell to summon the servants.

The model books of the Wiener Werkstätte (WW), whose archives the MAK has maintained since 1955, provide precise information on which artists did the designs, when the works were completed, the methods of execution, the materials used, the quantity produced, the hours worked, and the costs—an immense fund of information! The writing set was apparently also executed in a smooth finish—though in the WW the popular decorative hammered finish, giving the objects a glittering appearance, predominated.

The serial numbers in the model books were noted on the drafts and photographs of the objects, greatly facilitating their allocation to this day. Paperweight M 1189 can thus be traced from the design stage to its execution and documentation. The “inkwell with two nib boxes,” M 1187 in the contemporary photograph, was created in reduced form—without the nib boxes—as M 1211, corresponding to our example from the Marcus Collection. The inkwell here manifests a simplified stylistic idiom without molding, typical of the WW’s early geometric style inspired by the Classicism of 100 years previously. 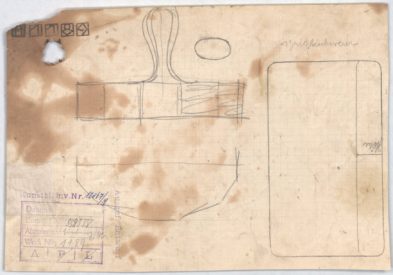 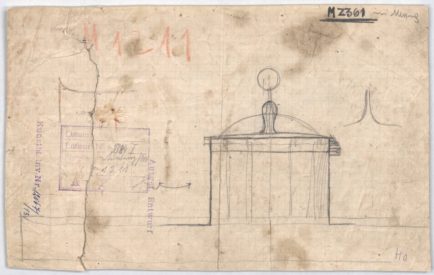 The basic motif of the design is a polygon, recalling the flutes of a column. Such an allusion imparts to the writing set connotations of masculinity—indeed, since the late 19th century Renaissance and Classicist styles had inspired the characteristic designs of masculine interiors. But as regards content too, the set emphasizes the role of the male householder pursuing his intellectual activities as he sits at his gentleman’s writing desk in his gentleman’s study—in contrast to the lady’s boudoir with its toiletries in decorative neo-Rococo or florid Art Nouveau styles. Josef Hoffmann took up these attributions with supreme elegance. This seems to have met with the approval of Andy Warhol, who acquired the writing set for his art collection. After his death, Warhol’s collection was auctioned in 1988—and parts of it were acquired by André Marcus, to whose enthusiasm for Viennese art around 1900 the MAK is indebted for this generous addition to its collection.