Documentation and conservation project on the Minbars of Cairo

On occasion of the opening of the MAK exhibition ADRIANA CZERNIN: Fragment, the architect Omniya Abdel Barr visited the MAK and took a closer look at the historic fragments from the minbar of Sultan Lajin (b. 1296) which is located in the Ibn Tulun Mosque (b. 876-879) in Cairo. The fragments have been in the collection of what is today the MAK since 1907. As a project manager at the Egyptian Heritage Rescue Foundation, Omniya Abdel Barr runs conservation and documentation projects in Cairo. She is directing the project Rescuing the Mamluk Minbars of Cairo funded by the Cultural Protection Fund (UK) to record, preserve, and conserve the Minbars of Cairo made between 1250 and 1517. For the MAK blog she will now introduce her work in a short video:

In this documentation and conservation project research will be conducted and a new comprehensive database will be created which can be used to aid future restoration. During the research phase, the condition of the minbars will be assessed and, subsequently, four minbars will be selected in order of priority for conservation and first aid consolidation work. 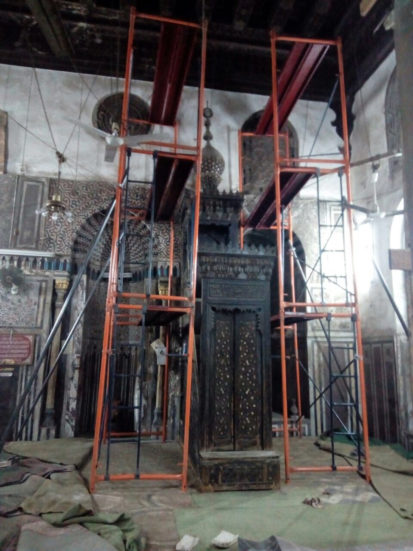 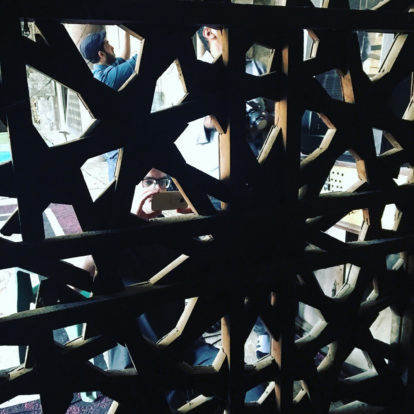 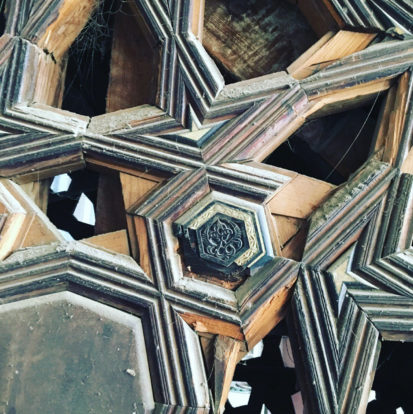 The Ibn Tulun Mosque in Cairo was built in the late 9th century and renovated under Sultan Lagin in 1296. One of the most important furnishings of a mosque is the minbar, originally an elevated seat used as pulpit which, however, also has a symbolic meaning as “Mohammed’s Throne.” This explains their costly fashioning with intarsia work in stone, wood and marble. The minbar of the Ibn Tulun Mosque was one of the most expensive of its kind worldwide. Parts of the rich wooden panelling were exhibited at the Paris World Exhibition in 1867 as one of the most important works of Egyptian applied arts. Afterwards the fragments landed in a great number of European collections. The largest coherent ornament fields are today in the Victoria and Albert Museum (V&A) in London and in the MAK in Vienna.

Illustration and description of the “Vienna Tableau”, In: Die Ausstellung von Meisterwerken muhammedanischer Kunst in München 1910 [The exhibition of Muhammedan Art in Munich 1910], ed. by F. Sarre and F. R. Martin, Munich 1912 © MAK 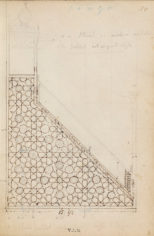 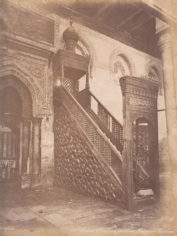 Adriana Czernin’s first points of contact with this major work of Egyptian art history occurred already in 2014. At the invitation of the MAK, she worked on the large format pencil drawing Nach Ibn-Tulun [After Ibn Tulun], so to speak the initial impetus of the work series. While Czernin was working on this graphic work, she noticed that eight small pieces were not part of the original minbar. The expansive works in the MAK exhibition ADRIANA CZERNIN: Fragment paraphrase the fragmentary nature of these parts.

In retrospect, this means that the fragments were mounted and exhibited as a rosette by 1892 at the latest, as this is when they were placed in the Imperial Royal Austrian Trade Museum. This, however, does not correspond to their original arrangement. This mode of composing or presenting objects bears witness to the belief of Franz Schmoranz Jr. (1845–1892) and other leading lights of the age that only “perfect artefacts” were to be exhibited, even if additions were necessary. Four parts of the rosette are indeed copies and four half margin pieces were put together to form eight-sided elements. Thanks to this “arbitrary configuration,” a museum object was created that had never existed in this form before.

In Adriana Czernin’s installation, the parts have been temporarily separated in order to demonstrate their “arbitrary configuration.” The artist explains her approach here:

Omniya Abdel Barr is an architect specialized in conservation of historic towns and buildings. She has participated in international projects related to urban conservation, monument restoration and documentation, as well as cultural heritage digitisation. She has a PhD in Mamluk architectural history from Aix-Marseille University (2015), an MSc in Architectural Conservation from Raymond Lemaire Center in KUL (2004), and a Bsc in Architecture from the Fine Arts of Helwan University (2000). She is currently a Visiting Fellow at the V&A and a Project Manager at the Egyptian Heritage Rescue Foundation (EHRF) where she runs conservation and documentation projects in Cairo.